Their Success With Duda

Webact is a digital marketing and web design agency that significantly scaled their business and improved customer satisfaction after moving to Duda.

Brian Lewis is the founder and CEO of WebAct, a digital marketing agency based in Denver, Colorado that offers top-of-the-line web design services to small business clients.

When WebAct was founded, the agency managed websites for only seven clients; however, as his agency grew, Lewis quickly learned WordPress, the CMS he used to build sites, didn’t scale with the needs of his business. Development costs were high, plugins were constantly breaking sites and managing and maintaining a large volume of clients was a nightmare.

These pain points impaired WebAct’s efficiency and put a strain on the business as their small, but growing team attempted to balance managing existing websites with acquiring new customers.

“We had about 5,000 sites over a three-year span, but we realized the farther we went we kind of hit our cap,” said Lewis.

Discovering the Benefits of Duda

After thoroughly evaluating a series of various website builders, including Wix, Weebly and Squarespace, he decided on Duda as the web design platform that would power his agency, and its customers, into a successful future.

“When we discovered Duda, we realized that they were very agency focused,” said Lewis.

He continued, “Duda enables us to assign highly customized roles and permissions to our clients, so we don’t have to give them blanket access to a website. Some of our customers are tech-savvy enough to make minor site changes on their own, and others would just break everything. The ability to easily turn on and off access for individual clients has saved us from hours of site maintenance work and a lot of headaches.”

Lewis also pointed to a variety of unique tools inside the Duda platform that allowed his team to build beautiful websites much more efficiently without compromising on design flexibility.

“With Duda, we can create websites in about half the time it would take in WordPress,” said Lewis. “We can set everything up from the beginning, including the H tags, images, and spacing. Whenever we have to add more content or pages, everything is already set up, so all we have to do is drop in the content and a few minor adjustments to make sure everything looks pixel-perfect. If a client requested a change, and our team had to do it in HTML or CSS, it would take on average a half hour to an hour, but with Duda I can do it in about five or ten minutes,” he added.

Before making the switch to Duda, building a single website on WordPress cost WebAct over $2,000 in yearly overhead expenses, which created a pretty high price point for Lewis’ customers.

“When you build a WordPress website you need lots of plugins that either have monthly or yearly costs,” said Lewis. “Not only are you paying for them, you also have to learn how to make them work with your theme. Once you add lots of plugins and the website is good to go live, you have to work out the bugs. This can take up a lot of a developers time, and their hourly rate isn’t cheap, ” he added.

Lewis also made clear that customers depend on WebAct to ensure nothing goes wrong with their websites. And if there was ever an issue with their WordPress sites, they’d expect WebAct to fix it for free, as quickly as possible. This meant that Lewis was routinely paying developers to manage existing websites instead of building new ones, which cost his agency a fair amount of money.

After switching to Duda, Lewis saw a substantial drop in overhead costs with the bulk of the savings stemming from WebAct’s reduced need for developers. Thanks to Duda’s intuitive drag-and-drop website builder, Lewis was able to rely more on cost-effective designers that didn’t need to spend hours of valuable time fiddling with code.

Lewis provided the following breakdown of WebAct’s production costs on WordPress when compared against Duda. 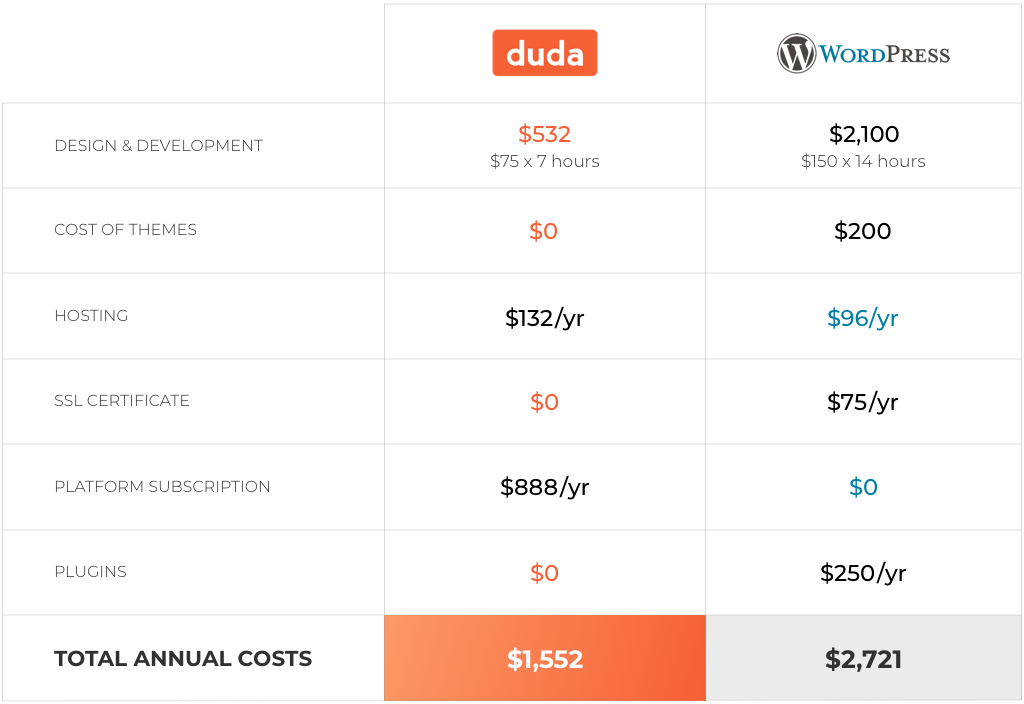 “Now that we’re working with Duda, we no longer have to deal with high development costs or buying plugins and themes. All that is included with Duda, and we’re able to pass off all those savings to our clients,” said Lewis.

He continued, “Additionally, now that we’ve lowered our price point, our sales team no longer has to do the hard sell; they’re not going to people’s offices and saying ‘Hey, you gotta go with us.’ We don’t have to do that anymore. We send them a proposal, we talk to them over the phone, and a lot of times they’re so blown away with the cost of the website when compared to many of our competitors in the area.”

“Working with Duda has meant a lot to WebAct. We’ve been able to build websites faster, expand our service offering, and tripled our client base in the last three years,’ Lewis concluded.

TELL US WHO YOU ARE AND HOW OUR SALES TEAM CAN HELP.